The message struck a chord with me, so I wrote it down somewhere, and thought to myself: "It's time to blog again". That obviously didn't work out very well.

However, looking back on this year, I'm pretty happy with the number of comfort zones I attacked. A lot of the things on this list scared me, but I'm so glad I said yes to every one of them. There's a lesson in there.

Together with Erik, we hosted several workshops around "Splitting up a problem into microservices". Running these sessions has been a lot of fun, but don't let yourself be fooled by it's technical appearance. Every time we ran this session, we got surprised by the direction it took.

Our community has grown a lot since its start, and I'm very proud to be an active part of it. Last year, I started helping out by hosting some of our monthly open spaces, and organizing technical talks.

Thanks to Gien we rebooted the habit of giving lightning talks, and I invite you to come talk about anything you're passionate about in software at our next open space.

Building a pet project in F#

I started learning F# last year, and I'm really glad I did. F# is a great place to start learning Functional Programming, with a vibrant and very helpful community.

A very fun way to start learning something, is by building cool stuff you can use yourself. So I built a little picture archiver in F#, which automatically organizes family pics on my nas.

Also, if you're looking for a way to bring F# into your daily work, I can recommend taking a look at FAKE. Introducing this at my current client has improved the readability and maintainability of our build and deploy scripts a lot. Even if you don't know F#, it's really easy to get started with this.

Organizing the very first Software Craftsmanship and Testing unconference in Belgium was quite the challenge, but it was amazing.
Three days of getting together with over 50 developers from 8 different countries to learn, share and practice software craftsmanship.

I had such a great time, and I can't thank enough everyone who made this experience great. Here are some pictures to make you jealous if you weren't there.

Facilitating a Global Day of Coderetreat

Facilitating this one didn't go anything like I expected. I'm used to doing code reviews and doing technical coaching, but this was very different. My facilitation style was much more forgiving and less "brutal" than I thought it would be. It was fun letting people find their own way, make mistakes, and learn from them.

There were a lot more people doing Functional Programming than previous years, which we'll have to start taking into account for Global Day of Coderetreat 2016!

Finishing my first year as freelancer

Probably the best decision I ever took for my career, altough I still think this is a very personal decision. A lot of people have asked me whether I'd recommend it, but it's not the panacea some people believe it to be.

For me, the freedom and responsibility were exactly what I needed. It's been a lot of work and stress at times, but I'd definitely do it again.

In retrospect, a lot of things on this list still kind of scare me, but some are starting to feel comfortable. And to quote one of my favorite books of last year:

The safety zone has moved. The propaganda has been exposed, and the old promises have been broken: Conformity no longer leads to comfort. But the good news is that creativity is scarce, and more valuable than ever. So is choosing to do something unpredictable and brave: make art. 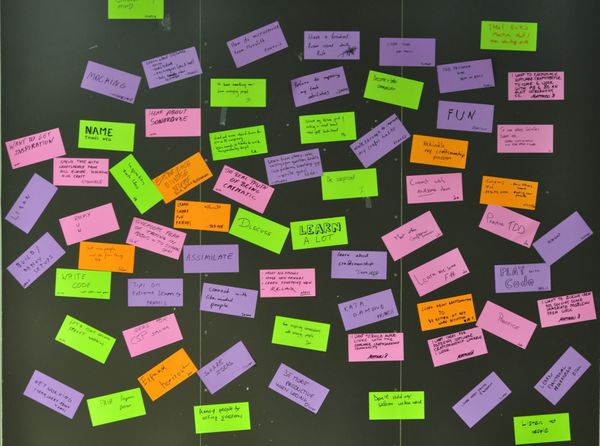 Over a year and a half ago, my friend Erik invited me to SoCraTes UK, an international software craftsmanship retreat, where I discovered the concept of an open space. I fell in love

After years of trying to ignore my lower back pain, it finally culminated in a spinal disc hernia last year. Luckily for me, that hernia was the final straw that got me actively